THE FIRST STATION OF THE RESURRECTION: THE EARTHQUAKE (MATT 28.1-4)

BREAKFAST WITH THE BIBLE: CHELMSFORD CATHEDRAL

After the sabbath, as the first day of the week was dawning, Mary Magdalene and the other Mary went to see the tomb. And suddenly there was a great earthquake; for an angel of the Lord, descending from heaven, came and rolled back the stone and sat on it. His appearance was like lightning, and his clothing white as snow. For fear of him the guards shook and became like dead men. (Matt 28.1-4 NRSV)

My best-selling book (translated into Burmese, Chinese, Korean, Romanian and Turkish!) is The Message of the Resurrection IVP 2000). In the chapter on ‘Matthew’s witness to the resurrection’ I wrote:

It was customary for Jews to visit graves ‘until the third day’ in order to prevent premature burial (Sem 8.1). Indeed, according to one rabbinic source (the Midrash Rabbah c.7 on Gen 1.10) mourning was at its height on the third day. The women therefore came with great sadness to the tomb of Jesus, expecting to see the cause of their grief only too well confirmed.

Matthew alone of all the Gospels mentions ” a great (‘mega’) earthquake” and the subsequent rolling back of the stone by the angel from the tomb (v2), just as Matthew alone of all the Gospels records an earthquake at the time of Jesus death (27.51)….Earthquakes were not unknown in Jerusalem. If an earthquake did take place on Good Friday, then it is possible that the earthquake on Easter Day was some kind of ‘after shock’. Or was Matthew, so steeped in the Old Testament, simply seeking to underline in a symbolic way that God was at work in a special way (see Isaiah 24.19; 29.6; Jer 10.10; Amos 8.8 etc.)? Certainly, in the Old Testament changes to nature which accompany the coming of the Lord are there to undermine that when God comes, he comes to act. Similarly, the earthquake in Matthew’s account may well be a pointer to the world-changing implications of the resurrection of Jesus….

At first sight it might appear that the women were witnesses of the earthquake and of the angel rolling away the stone from the tomb. If this were so, then it would directly contravene the testimony of the other gospels. However, another explanation is possible. In the New Testament the aorist past tense can often be translated by an English pluperfect. If this is so, then vv2-4 can be regard as an insert – “There had been a great earthquake….”.

An angel by definition is God’s ‘messenger’. Not only through his words does he convey the triumph of Jesus over death – his very action of sitting down on the stone symbolises that death has been routed.

Only Matthew records that it was the angel who “rolled back the stone” (v2). There is no need to assume that the angel did so, in order to allow Jesus to come out. As John makes clear, locked doors were no barrier to the risen Lord (John 20.19,26). The stone was surely rolled away for the sake of the women – in order that they might be able to see the tomb was empty.

The description of the angel (v3) is reminiscent of heavenly beings in Dan 7.9 (“his clothing was white as snow”) and Dan 10.6 (“his face was like lightening”), and is no doubt intended to convey a sense of awesome otherness. The combination that night of the earthquake and of the sudden arrival of an angel in brilliant light must have been unnerving, to say the least. No wonder “the guards shook and became like dead men” (v4). There is here a touch of irony. It is not Jesus, but those sent to guard the body of Jesus who now appear dead!

Today many feel embarrassed by this Matthaean addition to the Easter story. But in fact it is a great symbol of the effect that the resurrection of Jesus has had on the world stage. For although the tremors of this particular earthquake may have been localised and would have rated perhaps only a minor reading on the Richter scale, the tremors of the after-shock of the resurrection are of the greatest magnitude and continue to reverberate down through the course of history. In a sense the very foundations of the world were rocked, and the world has never been the same. For the resurrection of Jesus was no one-off isolated individual feat, but rather its repercussions are there for all to experience. What’s more, unlike any other earthquake which normally leaves havoc and devastation in its train, the ‘seismic’ repercussions of the resurrection are life-creating and hope-inducing. For in rising from the dead Jesus broke death’s defences once-and-for-all. The only destruction brought about by the resurrection is the destruction of “him who holds the power of death – that is, the devil” (Hebs 2.14). The earthquake recorded here in Matthew anticipates the theologising of Paul: “As all die in Adam, so all will be made alive in Christ” (1 Cor 15.22). On Easter Day the claim of Jesus to be the resurrection and the life (John 11.25) is vindicated.  The resurrection of Jesus has cosmic significance. All this is symbolised by the earthquake.

3. THE EASTER LORD OF LIFE

“Paint Christ not dead but risen”, cried Tommaso Campanella to the Italian painters of his day. “Paint Christ, with his foot set in scorn on the split rock with which they sought to hold him down! Paint him the conqueror of death! Paint him the Lord of life! Paint him as what he is, the irresistible Victor who, tested to the uttermost, has proved himself in very deed mighty to save.” 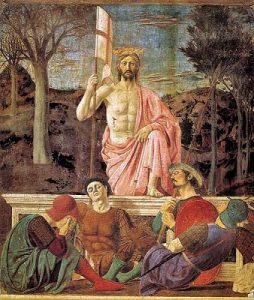 The position of Jesus’ leg on the parapet of the tomb suggests that Francesca portrayed Jesus in the very moment of his resurrection. Jesus is depicted as a triumphant conqueror, holding the flag of St George made popular by the Crusades. Apart from his wound he appears to have a near perfect body – there are, for instance no bruises or weals left over by the beatings he has received. Notice too that the trees on the left are mature and bare; by contrast the trees to the right are young and in leaf and are said to be a sign of the new life that Jesus through his resurrection offers 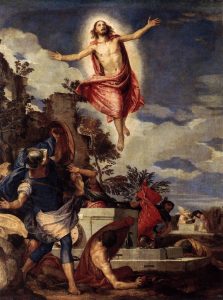 Veronese also portrays the moment of Jesus’ resurrection. Jesus still bears the stigmata, both in his hands and feet as also his side and looks to heaven (and not out at us) as he rises. The Council of Trent objected to floating depictions of Jesus, preferring the older idea of Christ’s feet firmly on the ground. Veronese captures the fear and horror of the soldiers. In the background to the right the art, with a repetition of the tomb, he depicts the arrival of the women to anoint Jesus’ body.

In both pictures Jesus is clothed not in white but in red – said to be the colour of kingship, love and sacrifice.

In my autobiography, This Is My Story: A story of life, faith and ministry (Wipf & Stock 2018), one of the appendices is entitled, ‘Why I am a Christian’. There I wrote: “I wish to set out for my grandchildren the heart of Christian believing, in the hope that they too will discover for themselves the amazing difference Jesus makes – to this life and the next……

It is because of the resurrection of Jesus that I am a Christian. There are many other reasons why a person can decide to follow Jesus, but for me this is the key.

The resurrection is at the heart of the Christian faith. In the words of Michael Ramsey, a former Archbishop of Canterbury, “The Gospel without the Resurrection is not merely a Gospel without its final chapter; it is not a gospel at all”. Ramsey was re-stating the thrust of Paul’s argument in 1 Cor 15: “If there’s no resurrection for Christ, everything we’ve told you is smoke and mirrors, and everything you’ve staked your life on is smoke and mirrors. . . And if Christ wasn’t raised, then all you’re doing is wandering about in the dark, as lost as ever. . . If all we get out of Christ is a little inspiration for a few short years, we’re a pretty sorry lot.” (The Message) The resurrection is the first article of the Christian faith and the demonstration of all the rest.

I have had many occasions to study the New Testament documents. As a PhD student I devoted three years of my life to examining the implications of the resurrection of Jesus for the early church. After using a sabbatical to study further the resurrection, I wrote a book for preachers on The Message of the Resurrection. Today I am more convinced than ever that God raised Jesus from the dead, and that in so doing Jesus broke down death’s defences for all who believe.

The evidence for the empty tomb is overwhelming. Have you noticed that all four Gospels agree that women were the first to discover the empty tomb and to receive the news of the Resurrection? No first-century Gospel writer would have dreamt of mentioning women as witnesses of the empty tomb, unless it happened to be true. Women in those days did not count; they were not allowed to give evidence in court. Yet in the New Testament the story of the empty tomb rests in the first place on the evidence of the women. All kinds of weird and wonderful suggestions have been made to explain the empty tomb. The women went to the wrong tomb. Jesus never really died. The body was stolen by the disciples. The body of Jesus was stolen, but not by the disciples. None of these arguments holds water. The tomb was empty because God raised Jesus from the dead……..

When my father died, we ended his death announcement in The Times with these words of Apostle Paul: “Thanks be to God who gives us the victory through our Lord Jesus Christ” (1 Cor 15:57). That is why I am a Christian.

What’s this site for?

Are you looking for resources to transform the life of your Church? If so, this website could be what you are looking for.